One thing I tried to do with regard to art work was add some ‘color’ to the locker room with motivational messages. I’m of the idea that a coach has to avoid talking too much. The team will tune you out if you are hammering away at them all the time. But, at the same time, the coach wants his players to be ready for the next opponent. So, I’d try to let them know who that next opponent would be. You’d be surprised how many players don’t focus in on that until the day before the game. So, I wanted to start a little earlier than that … without overdoing the stress.

Below are two posters I used when I was head coach at Delaware, 1966-71. One was for the PMC Cadets. That was Penn Military College, today known as Widener University, in West Chester, Pennsylvania, just outside Philadelphia. The other was for Albright College, in Reading, Pennsylvania, just northwest of Philadlephia. With the PMC poster, I sort of created their mascot with a cartoon-like image. You can find these examples and sort of copy one of them. With the Albright poster, I took their existing mascot and put him in a cartoon-like pose.

The idea is to put the message across in a low-key manner. With this, the players knew the following: (a) name of the team; (b) name of the mascot; (c) what the mascot looks like, more or less; (d) a motivational message given without transmitting any fear of the opponent. I’d also try to connect the mascot to the message, in this way: (a) the cadet is a military figure, so I used a sort of military message, using ‘bombs’; (b) the lion has claws, so he is going to use those claws on us, if he can. Again, the idea is to give them a word-picture they’ll remember.

The players paid attention. They might act like they were not getting the message … but they were. And, it all saved me from talking too much. No, I can’t say these messages added up to wins. But I thought they helped have a colorful atmosphere in the locker room and let the players know who was next on the schedule. Now, these two were done with a black felt-tip pen, plus a black Magic Marker. For exact circles, I used a plastic template, with different sized holes. Each took a couple of hours to do but they were well worth the time invested. 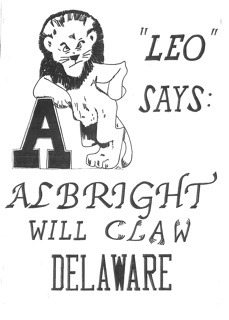 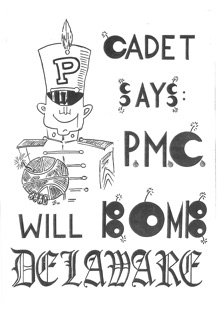