As I said, I did these posters for the locker room when I came back to take over Olympia Milan in 2011. The owner and sponsor was (and still is) no less than Giorgio Armani and the name on the uniform, that year, was Armani Jeans. The sketch you see is of one of our players: Stefano Mancinelli, aka ‘Mancio.’ So, the upcoming opponent was Benetton Treviso and I put their logo right at the top. Then, the messsage. I said, the other day, that I only said three things on the message. Well, I lied! As you can see, I nearly put the entire game plan on this one!

I learned about the use of colored pencils from Harold ‘Tubby’ Raymond, the Football Coach at Delaware when I was coach there, 1966-71. He was a highly talented artist. He could use pastels and he could use oils. I mean, he was really good. He showed me how to proceed: You put a ‘wash’ on the poster; a 4″ strip of white pastel paste on the poster, then a drop of red and a drop of white. You then use your hand to spread it around, like finger painting. You let it dry overnight. The end product gives a flesh-colored background. That’s the ‘wash.’

Then, you use colored pencils to sketch the face of the player. Now, once the wash is down, you have no more room for error, so I would make the sketch on a separate piece of paper and get it to where I was satisfied. I would then ‘etch’ it into the wash by putting it over the wash and tracing it with a ball-point pen. That would leave imperceptible, invisible, lines there and I could follow those with a light pencil. That gave me the ‘cartoon.’ After that, it’s pretty basic: you just try to get the colors right. The skin color you see on the poster is the wash; it has not been painted on.

Again, learned to avoid doing too much on these drawings. I just try to ‘shade’ with the side of the pencil, to avoid the ‘hard’ look a heavy line gives. I wondered if today’s players would accept such a thing as a motivational poster on the locker room bulletin board. They did and they all kept them. I’m not sure if each guy framed his but I know some did. So, they do pay attention to them, they do like them, and they did wait for each one. I notice I did not ‘sign’ this one, though I did with others, with “DP ’11.” I must not have been on an ego trip that day! 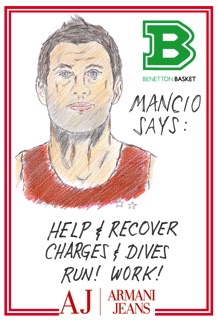 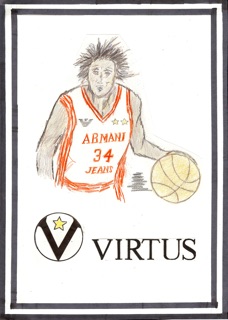