I used the locker room posters at every stop of my coaching career, including here in Milan, with players over 30 years of age. Below are two drawings. One is a facial sketch of my point guard, Mike D’Antoni. This was actually 1982-83 and we were going to Moscow to play CSKA (Central Army Sports Club) in the European Cup of Champions. They are a perenial power, so no ‘message’ was needed. So, under the sketch of Mike, I put CSKA in the Cyrillic lettering. Every athlete in Europe knows that acronym on sight. Nothing else is needed.

When you go up against a great team, you really don’t need much of a message. In that same 1982-83 season, we were to play mighty Real Madrid. So, all I did was reproduce their white game jersey. One of their nicknames is “Los Blancos,” the Whites. Their colors are, actually, blue and white. When you play them, it’s enough to put the name on the bulletin board. Nothing more is needed. And, I put number 11, for Fernando Martìn, their best player, on the jersey. This was their traditional jersey back in the 1980s, though it’s different today.

I picked up a lot of tips on how to do these things when I was at Delaware and my great friend, Charley Burns, a commercial artist for DuPont, gave me pointers. He was a believer that less was more. That is, put in one line less if you can. He also said that facial sketches didn’t need lines … they needed shadows. In the sketch of Mike, I did not follow his advice to the letter but it came out OK. By shadows, I mean soften things up with the side of the pencil, as opposed to the point. But, when you do the final product, black lines are used. There is no other way.

I think every player kept every poster I did of him. And, they had fun. Dino Meneghin: “Coach, you did a poor job on the sketch of Mike.” I knew where he was going with all this, so I played along: “Why? Does he look too bad?” Dino: “No, Coach, he looks too GOOD!” But, I had a rule: No one draws on the posters. No one ever did. I even did them when I came back four years ago to take over Olympia Milan. Again, each guy kept the poster I did of him. And, when I was on an ego trip, I signed them, like Picasso himself! Great fun. 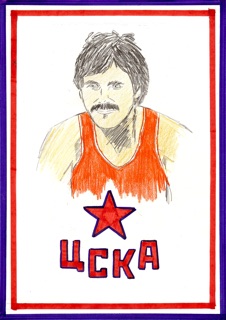 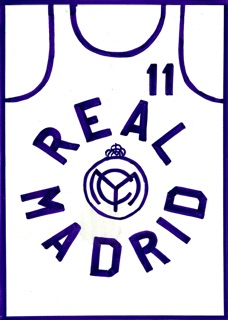