When you play in the European Cup of Champions (today it’s called the European League), you not only face the best teams and the best coaches in Europe but, of course, the best of the best when it comes to players. In the 1985-86 Cup of Champions, we faced two of the best I ever ever: 6’5″ Drazen Petrovic of Cibona (Zagreb, Croatia, still in the old, unified, Yugoslavia) and 7’3″ Arvydas Sabonis of Zalgiris (Kaunas, Lithuania, still in the old, unified, USSR). This was in the Final Round, of 6 teams, and we played them each twice, away and then back here in Milan.

Over in Zagreb, Petrovic (who had led Cibona to the title the year before) just put on a clinic. They beat us, 103-87. He had 47 points on 19 for 23 shooting. And, he probably accounted for the rest of their points with his passing. You could not help on him or he’d find the open man. Before the return game, I put up the poster of him … and I also threw my old defensive ideas out the window and we went with a ‘half-help’ and recover on him. We held him to 16 in Milan and beat them, 90-66. But they would go on to win the title again, vs. Zalgiris and Sabonis.

Up in Kaunas, we lost to Zalgiris by one, 80-79, as my 19-year old American, Cedric Henderson, really disoriented by being in the USSR, had zero points. Before the game in Milan, I put up the poster of Sabonis. We beat them here, 95-66, but the damage had been done with the loss up there. The top two teams in the Final Round play for the title. We were third, despite beating Cibona by 24 and Zalgiris by 29. Had we gone to the USSR later in the season, Cedric would have been fine, as he got it together after that and took us to the Italy Cup and Italian Playoff titles.

No one can imagine what these two players were like in the 1980s. When Sabonis was 17, he played with the USSR vs. US college teams. Bob Knight called him “The best center in the world.” He was perfectly proportioned, at 7’3″ tall and could do anything, like a huge Michael Jordan. He played in the NBA, and well, but people saw just a shadow of what he was. He just simply forced your hand. I didn’t do many posters of opposing players. These may have been the only two. Well, Petrovic is in the Hall of Fame and Sabonis may land there some day. 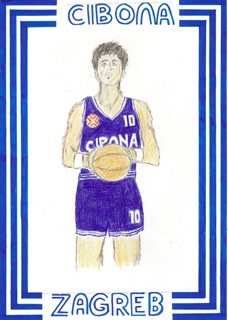