PORTLAND, Ore. – The USA team battled back from an 18-point deficit at intermission Saturday night to take its first lead via a five-foot flip shot by UCLA-bound Kyle Anderson with 3:21 to go at the Rose Garden.
That was quite the comeback, eh, for some of the best young U.S. men’s hoopsters during the 15th Nike Hoops Summit?

The World squad regained the lead with 1:21 remaining on a short jumper by Dario Saric of Croatia and pulled away for an 84-75 victory in front of 10,666 for only the fourth win by the World in the series.
While his teammates were hitting just a combined 16 of 51 shots from the field, Shabazz Muhammad (Las Vegas Bishop Gorman – the consensus national High School Player of the Year this past season ) was the primary reason the USA squad kept from being run out of the facility in the first half and finally made things interesting down the stretch.

The 6-foot-5 lefthander, who is scheduled to announce his choice of college Wednesday when he is in Charlotte, NC, for the Nike Jordan Classic, hit 12 of an event-record 27 field-goal attempts for another Hoop Summit record of 35 points.

After Saric’s go-ahead shot, Michigan State-bound Gary Harris (three of 10 from the field) missed a short jumper but USA got the ball back on a World turnover with 1:13 remaining.

Following a USA timeout, Muhammad missed a 10-footer and center Wang Zhelin was fouled at the other end with 45 seconds to go.
The 7-footer (who finished with 19 points and eight rebounds) made the first throw then missed the second.

But a teammate controlled the offensive rebound.

Zhelin was on the verge of a dunk after a nifty pass from the 6-10 Saric but 6-11 Nerlens Noel (four points, four rebounds and four blocked shots) rejected the attempt with the most spectacular block of the evening.

However the ball caromed into the hands of 6-7, 239-pound senior Anthony Bennett for Findlay Prep in Henderson, NV, and Bennett (seven points/11 rebounds) tossed in a 3-pointer just before the shot clock expired for a six-point edge with 22 seconds to play.
Muhammad, who played all but 57 seconds in the 40-minute (in quarters) contest, grabbed nine rebounds and converted 10 of 11 free throws.

The 6-7 Anderson (Jersey City, NJ, St. Anthony), who could also by joined by Muhammad (also considering several other programs, including recently crowned national champion Kentucky) as a future Bruin on Wednesday, added 12 points, 10 rebounds and four assists for the USA group.

But, other than Muhammad, the team struggled from the perimeter, with Archie Goodwin (a Kentucky signee), Gary Harris (Michigan State) and Rasheed Sulaimon (Duke) going a combined seven of 29 from the field.

On the other hand, the World squad got solid to exceptional performances from multiple sources.

*Zhelin (Fujian, China), who turned 18 on Jan. 20, was considerably more effective on Saturday than he was during the scrimmage (vs. a collection of former college players) on Thursday night and a 90-minute practice on Friday afternoon;

*Bennett (who could end up at Kentucky, Florida or Oregon) didn’t shoot particularly well (two of eight from
the floor, including the buzzer beater that iced the outcome) but was the most physical post player on the floor;

*Saric (who turned 18th birthday a few hours following the conclusion of the contest) was the only participant who played in last year’s game. It’s easy to understand why the consensus of the multitude of NBA employees in attendance is that the multi-skilled forward (who had 13 points/14 rebounds/five assists) was one of the two-best prospects on the World team;

*The other player in that category was a sophomore from Toronto (by way of Huntington Prep in West Virginia), 6-7 Andrew Wiggins.
He struggled with his jump shot after intermission (finishing seven of 18 from the field, including two of 10 in the second half) but scored a team-best 20 points. And several of those seven buckets were of the spectacular variety, to say the least. He is as dynamic, athletically, as any player at his size among high school-aged players currently playing in the United States. 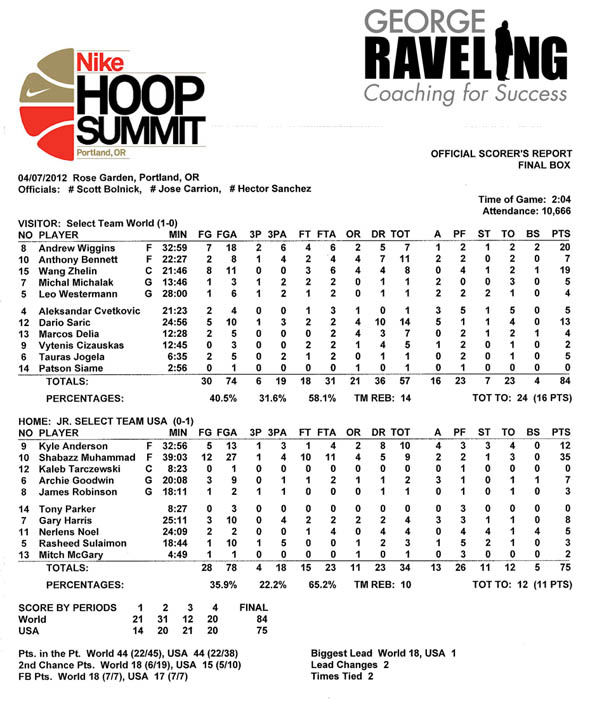 Frank Burlison / About Author
One of the most respected basketball writers and basketball talent evaluators in the world. He’s an original (1978) member of the McDonald’s All-American Selection/Advisory Committee and was inducted into the United States Basketball Writers’ Association Hall of Fame during the 2005 Final Four in St. Louis.
More posts by Frank Burlison

In my last post I shared with you some of my observations of non scholastic basketball. Nothing is perfect as…

LAGUNA NIGUEL, CA – Well, there wasn’t much mystery about who was going to be the national high school Player…

For thousands of players this month is a very important one. Hundreds of tournaments, camps, and showcases are going on…

[h2]The University of Maryland’s Pe’Shon Howard is anxious to get back to doing what he loves, leading a basketball team…

LONG BEACH, CA – The three days and one night of the Nations Showcase put some of the better high…

CHARLOTTESVILLE, VA – The media-types were in the standings and the games tipped off Thursday morning. And a pretty nifty…

CHARLOTTESVILLE, VA – Wednesday’s Day 1 of the 19th NBA Players Association Top 100 Camp was all about players and…

www.BurlisonOnBasketball.com   [color]LAGUNA NIGUEL, CA[/color] – The best prospect in the high school Class of 2012 I saw over the…

LAGUNA NIGUEL, CA – I spent about 27 hours over Friday and Saturday in Las Vegas, most of that stint…

Young players can take a lot out of the NBA Draft. Not only is it an exciting time for players…

LOS ANGELES, CA – The annual Fullcourt Press Fall Showcase usually proves to be just that – especially when it…